With the new Phainopepla Fables, we’ll be presenting a broader range of topics. Here is something new and different than our typical posts centered around the LCRV! Hopefully this might generate interest into looking at molt and caring a bit more for some of our introduced birds, and who knows one of you out there might beat everyone to it and published a paper on molt in parrots! 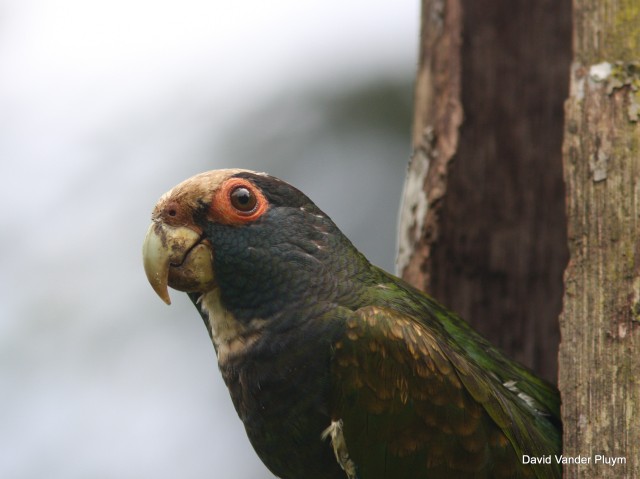 This White-crowned Parrot was photographed at its nest on 1 Mar 2009 at La Selva Costa Rica. Copyright (c) 2013 David Vander Pluym

I love parrots. I always have, as a little kid I would go with my parents to the mall just to go to the pet store. While the other kids would want to see the cats or the dogs I would head to the birds. I even had a Budgie named Holly. Lauren and I spent a couple season working for Alice Boyle in Costa Rica (at Rara Avis) primarily with white-ruffed manakins. Part of the work included banding and we would talk of catching a parrot with a mixture of hope and fear. Though Mealy Parrots were common they are a canopy species and we never got to find out if we could extract one while keeping all of our fingers! 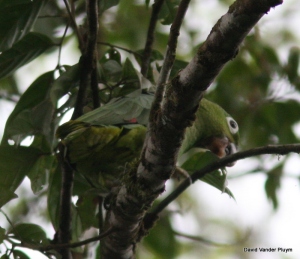 Thinking about Costa Rica reminds me that I should clarify that I usually love parrots. It can be very hard to listen for calling manakins, or anything else for that matter, while you have a flock of Mealy Parrots above you! As I mentioned above Mealys are a canopy species and can be very difficult to see while perched high above you or hurtling over the canopy in a noisy flock. Given how little we know about molt it shouldn’t be surprising that there isn’t a lot of information out there on Parrots. Molt is often ignored by birders and ornithologists but it has huge part of a bird’s life; they will even forgo breeding in order to molt. Having an understanding of a bird’s molt pattern can help us understand most aspects of its life as well as its identification. I strongly recommend reading Steve Howell’s Molt in North American Birds for more information. 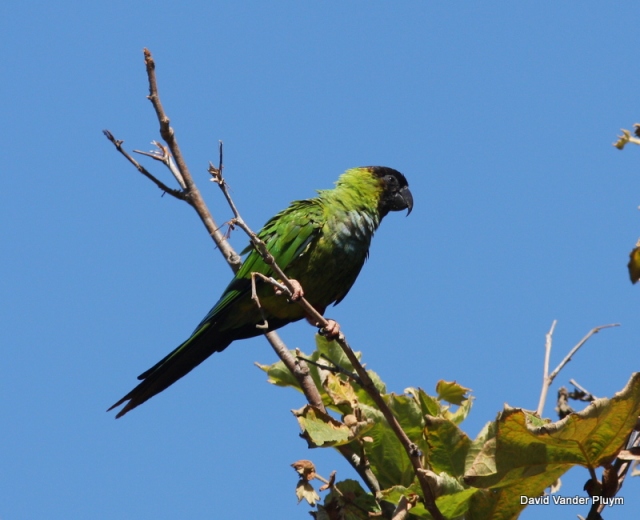 Most people have heard about the new information that suggests that parrots, falcons, and passerines are all more closely related to each other than to any other orders of birds. This has been accepted by the AOU and a change in the taxonomic order of checklists has resulted. Long before the genetic work was done a clue was in the molt of both groups. They both share the distinctive trait of starting the wing molt in the middle primaries (p4-6 depending on taxa) and working both inward and outward. In parrots this can be protracted and cycles can overlap or even replace feathers out of sequence. Why this is adds to the mystery of parrots.

Though we still have a lot to learn about parrots in the wild, most of us don’t want to spend our vacation in the tropics studying the molt of parrots, but it never hurts to opportunistically jot down some notes or take photos. Though you can also visit a museum for some research  Instead let’s consider introduced parrots. Introduced birds are largely ignored by birders in favor of looking at native species and are often demeaned as “trash birds”. Recent years have seen an increase in interest of paying as much attention to our “trash birds” as our native birds but there is still little published information on their basic ecology. There is work out there trying to fill this data gap with the recent example of the work that went into getting the Rosy-faced Lovebird added to the Arizona and ABA lists. Plus a lot of these introduced birds are in backyards which make them easily accessible for anyone to study. The glory of figuring out their molt patterns is anyone’s for the taking!

Rosy-faced Lovebirds will come in to back yard feeders such as this individual in the Phoenix area 3 Dec 2010, an easy way to study molt. Copyright (c) 2013 David Vander Pluym

With large numbers of introduced and naturalized populations of parrots in the United States (particularly southern California and Florida) we have a set up for looking at ways in which these birds are able to adapt to their new homes. By looking at their molt we can help fit pieces of their ecology together. Molt might help us understand if they are using native plants subject to local conditions or primarily feeding in our gardens. It could help us understand how they have adapted to their new homes. Do species differ in the timing of the molt? If so this might be useful for identification as well as nest timing. Have sedentary species become nomadic or have nomadic species become sedentary? With more stable resources are they able to speed up their molt?

Notice the gaps of missing primaries in this group of Red-crowned Parrots photographed in Pasadena California 13 Aug 2010. These birds look like they are molting p7. Copyright (c) 2013 David Vander Pluym

The left bird looks like an adult and its primaries and tail look worn, indicating unlike the bird on the right, it has not started molting. These Red-crowned Parrots were photographed in Pasadena California 13 Aug 2010

Red-crowned Parrot is one species that has become well established in several states including California and Texas. As the photos above indicate, by mid August the majority of these Red-crowned Parrots in California were molting in a similar pattern indicating they started after breeding (typically ending June for this population). However they are not that far advanced in their molt (remember they start with the middle primaries and some have not yet initiated molt). Might this indicate a later nesting? Or do they have a protracted molt even with the abundance of resources of suburban southern California? How long will it take? Will they molt through breeding or are there not enough resources to support this? Do different flocks differ in their timing? What about different populations in different states? With more data they could be compared to wild birds. Species such as Rosy-faced Lovebird are able to breed in their first year of life and likely produce two broods a year. What molt pattern might they show?

Red-crowned Parrot molting p6 Pasadena California 13 Aug 2010. Most parrots are believed to have only one molt per year as an adult, but might some replace some head feathers as a prealternate molt before breeding? Or do they not need to as they form long term bonds? Might this tell us something about there mating strategy? Copyright (c) 2013 David Vander Pluym

I tried to cover a few basics about parrot molt in this post asking a few questions to pique people’s interest. And if you have read this far hopefully I was successful! I did just barely scratch the surface and I am sure all of you have your own questions that you want answered! For more information on introduced Red-crowned Parrots (and other species in California) you might want to check out Western Birds Vol 28 #4. For more on Rosy-faced Lovebirds in Arizona check out Arizona Birds online. Though there are more papers out there, there is still a lot to be learned.

Birder biologists currently living and working in the Lower Colorado River Valley. When not out in the field I spend a lot of my time reading and writing about birds. I have always been drawn to areas under birded and species that we know little about.
View all posts by David Vander Pluym →
This entry was posted in Molt and tagged Introduced, Molt, Parrots, Tropics. Bookmark the permalink.