While the icy grip of winter closes ever tighter on every other corner of this country, here on Arizona’s west coast we have watched as winter disappeared in January and February, with winds much calmer than usual and the sun’s rays turning a cool January morning into an 80 degree sunshiney day. 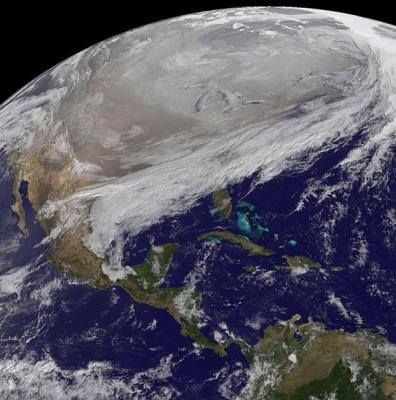 Spring is here! And definitely only here! (Photo allegedly from NASA)

I’m really a winter person. I was a child in Minnesota, where wind chills less than -40 were not a good excuse to miss school or (especially) sledding, where we had things like mudrooms and fireplaces, and we changed our shoes Mr. Rogers-style when we went inside. But here I am in the desert, and even I have enjoyed driving with the sunroof open and the windows down!

Birding has been decent in this warm early spring. Another trip to Cibola with David turned up more shorebirds on Hart Mine Marsh: American Avocets and Long-billed Dowitchers. We spent an hour and a half at the Awesome Goose Pond adjacent to Nature Trail, studying geese until our heads hurt. This produced one good year bird, Greater White-fronted Goose, along with a cool hybrid and five Cackling Geese.

Greater White-fronted Goose and a hybrid of that species. Initially identified as half Canada Goose, but I suspect now that the other parent was a Cackling Goose.

A few days later, I spent the day birding the Parker Strip, hoping mostly for rare landbirds. My first stop was ‘Ahakhav Tribal Preserve, always good for lots and lots of birds. The cottonwood plantings did not disappoint, with flocks of hundreds of Audubon’s Warblers and a few surprises sprinkled in. These included the surprise continuing Greater Pewee which had been thought to be gone, a great bird to pick up for the Big Year! I also picked up Dark-eyed Junco, one of my most expected needs for the day, along with a low-end rare winter Gray Flycatcher and a Black-and-white Warbler to kick off eastern warblers! A stop at my favorite Bell’s Sparrow spot produced the sparrows as well as an Ash-throated Flycatcher. Various stops along the Parker Strip didn’t produce much, but I finished the day on a great note. After David texted to say he had a White-winged Scoter on the La Paz side of the Bill Williams Delta, I had to stop and look for it. Well, no luck with that bird. But, the two continuing birds did appear in La Paz, for the first time as far as I know! (Since then, they have been frequenting La Paz waters more often, but hey….)

Figuring flocks of hundreds of Audubon’s Warblers always have something to offer, I decided to try that route again. Okay, that’s not true. I had a spare morning so I went to the end of Planet Ranch Road to walk the desert route and find Black-throated Sparrows. What I didn’t foresee was that I would be held up about an hour by the budding cottonwoods sagging with the weight of all those 15-gram birds. Those included a low-end rarity, Plumbeous Vireo, and a common migrant that is very rare in winter, a Townsend’s Warbler. Also, another low-end rarity that weighs significantly more than 15 grams: a Western Scrub-Jay, a holdover from this fall’s invasion which I had also been hoping to find. And the Black-throated Sparrows, probably the most abundant breeding bird in La Paz County, were right where they were supposed to be up a nice desert wash.

For our last La Paz trip in January, David and I took a day and visited the legendary Alamo Lake. Last year’s spoils on that far-off isolated lake? Red-necked Grebe, Mew Gull, Lesser Black-backed Gull. This year…well, there were a whole lot of Western and Clark’s Grebes. So far, anyway; it’s still early! The upshot is that we spent a few hours on the drive there looking for desert birds, especially thrashers. No Le Conte’s or Curve-billed, but a Sage Thrasher was a county bird! Another county bird was mixed in with some nice sparrow flocks: we had several Sagebrush Sparrows.

February has been a little slow so far. Lots of fabulous continuing birds, but I haven’t had much time to go birding since returning from a brief trip to Florida. Still, I have picked up a few year birds: a Bell’s Vireo at ‘Ahakhav, two American White Pelicans flying up the Bill Williams River (#150!), and a flock of early returning Cliff Swallows.

The next few weeks should turn up more early spring migrants, like Blue-winged Teal, White-winged Dove, Black-chinned Hummingbird, and Violet-green Swallow. Maybe I could finally find a Dunlin, too…?

I live in Lake Havasu City, Arizona, where I work as a field biologist and spend as much of the rest of my time as possible looking at (and listening to!) birds.
View all posts by Lauren Harter →
This entry was posted in Big Year, Bill Williams, La Paz County, LCRV, Migration, Vagrants and tagged Alamo Lake, Arizona Birding, Big year birding, bird migration, County Big Year, La Paz County. Bookmark the permalink.