Yesterday, I had an opportunity to photograph a favorite desert bird – a friendly Greater Roadrunner.  I’ve encountered this individual before, a spunky bird with little fear of humans. 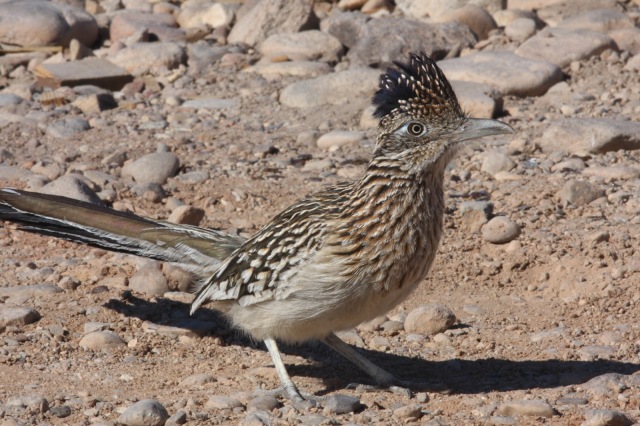 Most Americans are aware of the existence of birds called roadrunners, and lots of folks come to Arizona excited to see these birds.  Of course, the comic version most of us grew up with isn’t exactly accurate.  Unfortunately, real roadrunners don’t say “meep meep,” although this bird did repeatedly give an endearing “churrr” call.  Recently, when I was looking up how fast roadrunners can run (20 mph), I found an answer in the category of “flightless birds”.  Actually, roadrunners can fly – not very well, usually just gliding into cover – but they do it fairly often.
There are some pretty cool myths about these birds.  My favorite is that in some parts of Mexico, they are thought to bring new babies home, like the stork of the Old World.  They provide good luck to travelers, build cages around snakes, and of course, drop anvils on top of sneaky coyotes.

If you ask me, the facts about roadrunners trump the myths…except maybe the anvil thing.  Really, they are just large cuckoos adapted to life in the deserts of the southern U.S. and northern Mexico.  Their big bill is a lethal weapon, used to subdue lizards, nab birds, and even wrangle rattlesnakes.  Sometimes, they will even team up with other roadrunners to surround and kill a rattlesnake.  This bird would just lunge forward every once in a while to pluck an insect from the gravel. 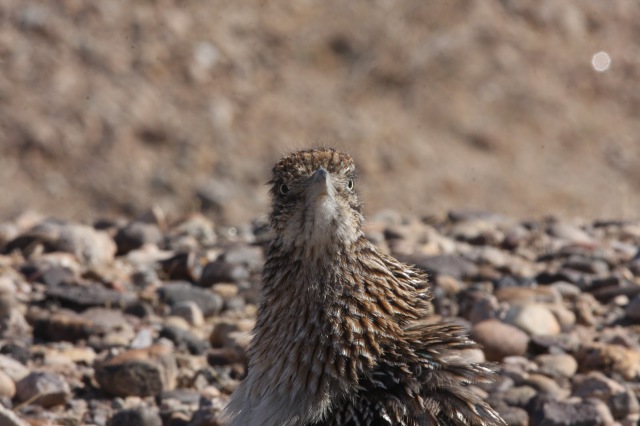 Their streaky plumage is excellent camouflage in the desert brush, useful for both hiding from predators and sneaking up on prey.  When alarmed, they hunker down on the ground and wait for the danger to pass. 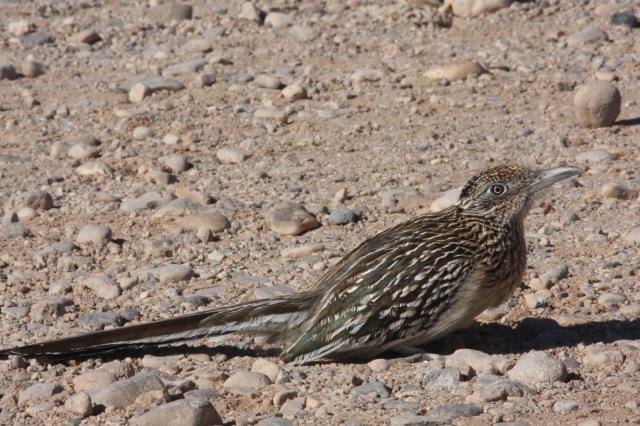 Being desert birds, they are well adapted to deal with heat.  The desert can get very cold, though, and roadrunners have a special adaptation for warming up:  their skin is very dark, and they will position themselves with their back to the sun, fluffing up their feathers and soaking up the heat.

The roadrunner is one of the greatest characters of the desert, with its expressive crest and tail, both constantly raised and lowered.  This was a great opportunity to study one of these birds up close, seeing all the intricate details of its plumage and enjoying its spunky personality.

I live in Lake Havasu City, Arizona, where I work as a field biologist and spend as much of the rest of my time as possible looking at (and listening to!) birds.
View all posts by Lauren Harter →
This entry was posted in Species Profiles. Bookmark the permalink.