Big years will be getting a lot of attention soon, with the film “The Big Year” to be released sometime this year.  Usually when we hear about a big year, it’s for the ABA area (the U.S. and Canada).  This is an endeavor that requires a lot of time and money to chase the megas that turn up in all corners, plus all the regularly occurring species in a huge geographic area.  Last year, we ran into Bob Ake in the field a few times, at the Salton Sea Bean Goose, then in Phoenix where a Baikal Teal was seen.  Bob ended up with an impressive total of 731 species for the year!

Other times, big years have a more restricted area – state or county.  Before moving to Lake Havasu City, I had decided to do a Mohave County big year in 2011.  I was largely inspired by my friend Tommy DeBardeleben, who did a Maricopa County big year for 2010, and I’ve set the same goal: 300 species.  This will be a challenge for a number of reasons.  Mohave is the fifth largest county in the United States (excluding Alaska’s boroughs), slightly larger in area than Maryland.  The Grand Canyon lies between me and the northern part of the county.  Also, as I mentioned in my last post, there just aren’t many birders out here.  That means I can’t rely much on the benefit of chasing reported rarities.  Almost a month in, it’s been a lot of fun, and I’m up to 124 species.  There have been some nice highlights so far, like Rufous-backed Robin, Black and White-winged Scoters, Tundra Swan.

Yesterday, David and I spent the morning at Pintail Slough, where our target was a Red-shouldered Hawk.  John West found this bird in December and pointed it out to us on the Havasu CBC, but I had yet to see it this year.  Fortunately, it was one of the first birds we saw upon arriving.  A few hours of exploring ponds, canals, fields, and cottonwood groves turned up seven more year birds, including Cinnamon Teal, Lincoln’s and Vesper Sparrows, Horned Lark.  Although the hawk eluded photographs, I snapped a few shots of a Barn Owl, a common species in the LCRV but nevertheless a county bird for me. 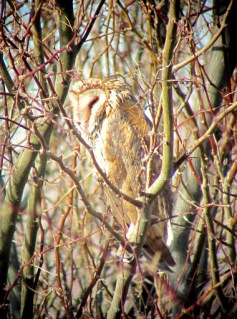 I live in Lake Havasu City, Arizona, where I work as a field biologist and spend as much of the rest of my time as possible looking at (and listening to!) birds.
View all posts by Lauren Harter →
This entry was posted in Big Year, Havasu NWR, Mohave County, Trip reports. Bookmark the permalink.