On Wednesday morning, 20 Feb Lauren and I awoke to find the mountains around us hidden by clouds with a steady rain falling. As the clouds lifted they revealed the mountains were covered in snow. This may surprise people, but since we have moved out here the mountains behind us have regularly gotten snow a couple times each winter. Typically it is small amounts and does not last long. The notion of cold can be hard to imagine in a place known for heat and Lauren has heard at least one local insist that it never gets below the 70s F here. Our average winter highs are mild, typically in the mid 50s degrees F, but after a cold front or with the wind howling it can be cold!

The view from the Golf Course at Rotary Park Lake Havasu City on 20 Feb 2013. These are the Mohave Mountains above Lake Havasu City. Copyright (c) 2013 David Vander Pluym

We headed down to the lake to see if anything new had shown up with the storm. Weather can have a major affect on bird migration and there is a lot that has been published on this topic. (A good place to start is “A Weather Primer for Birders” by Paul Lehman and published in 2003 in Birding 33: 596-605.)  We have gone down to the lake in all kinds of weather and so far have found no pattern for waterbirds. Perhaps looking at a larger area may reveal patterns (such as what is going on in the Gulf of California in spring or the Great Basin in fall and winter), but on a local scale storms do not seem to drop water birds. If anything it seems to clear them out. Though  we are not sure why this is, I suspect it is because of the continuous habitat along a north-south migration corridor, birds just don’t need to drop down at any single spot.

It might be that the Yuma or Blythe areas would be better places to look for storm related birds. These areas are closer to the Gulf where birds might cut across toward the Pacific Ocean such as they do across the southern Salton Sink and San Diego County (see especially  Patten, M. A., et al. 2003. Birds of the Salton Sea: Status, Biogeography, and Ecology). Perhaps in these areas a storm might drop something of interest, as seems to happen at places in the Salton Sink like Fig Lagoon. It would be interesting to check if you are there during storm, especially in the spring.

Storms have brought good water birds to Lake Havasu, most notably in the form of Tropical Storms. We dream of a tropical storm coming up the river from the Gulf, and if one is going to occur it might as well be while we live here! The last one was in 1997 with Tropical Storm Nora and it brought hundreds of storm-petrels to Lake Havasu, along with a Black-vented Shearwater! For more information be sure to read this Western Birds Article. These events are incredibly rare, but as the monsoons start, sometimes a waif or two will drift north, though the best I have managed is a Brown Pelican.

You might have noticed that I have been specifying water birds, as we have had great luck with storms passing in spring migration and dropping land birds. We had one such day last April, which Lauren wrote about here. It is interesting that these small fallouts can be very localized with nearby areas having few birds. A rare late spring storm was likely the reason a Blackpoll Warbler was present at Cape Havasu for Lauren to find! For our next spring storm I think I will head out for landbirding!

As you might have gathered, we did not find anything that could be storm attributed yesterday, but we did have a new high count for us of 7 Pacific Loons together at Site Six! With the snow covering many areas some land birds might be displaced, but they haven’t been discovered yet.  Today snow still dusted the tops of the mountains with more starting to fall, we quickly checked Site Six again, where we were able to find 6 Pacific Loons. The Pacific Loons are always nice to enjoy and we were able to again hear their calls, something I had never heard before this winter. 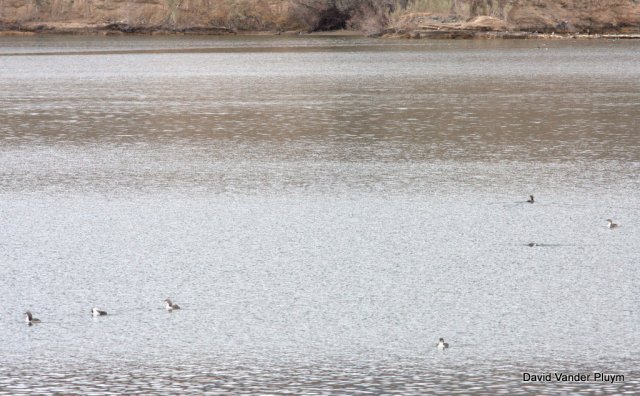 Though distant and hard to id from a blog post photo, these 7 loons are Pacific and the most I have seen together in the LCRV. Here at Site Six on 20 Feb 2013. Copyright (c) 2013 David Vander Pluym 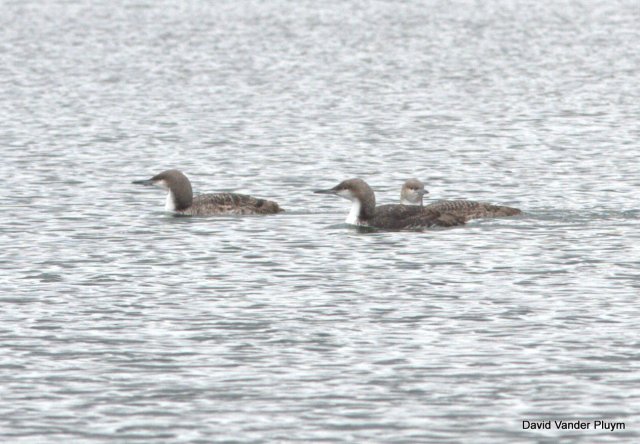 Birder biologists currently living and working in the Lower Colorado River Valley. When not out in the field I spend a lot of my time reading and writing about birds. I have always been drawn to areas under birded and species that we know little about.
View all posts by David Vander Pluym →
This entry was posted in Lake Havasu, LCRV, Vagrants and tagged Blackpoll Warbler, Lake Havasu, Pacific Loon, Weather. Bookmark the permalink.