The Franklin’s Gull is an attractive member of one of my favorite groups. It is also always one of the highlights of spring waterbird migration in the LCRV. With a black hood and a pink blush to the chest even those who have not yet come around to liking gulls have to admit this is an attractive species.

Franklin’s Gull in alternate plumage is a pretty attractive gull with the black hood and pink blush to the chest. It is also one of the easier gulls to ID in this plumage; note the large white eye arcs, red bill, dark mantle, and large white apical spots on the tips of the primaries. This individual was at Rotary Park, Lake Havasu City AZ on 26 Apr 2012. Copyright (c) 2013 David Vander Pluym

A widespread breeder across the northern Great Plains and local in the northern Rockies and Great Basin regions, this species forms huge colonies where it is a raucous and conspicuous species. It primarily migrates across the Great Plains to its wintering grounds in western South America, however the species moves across much of the western US as a low density migrant where it is rare to uncommon in spring and generally rare in fall.

Franklin’s Gull is a colonial species and in the summer of 2010 Lauren and I did surveys for colonial marsh nesting species including Franklin’s Gull for the Klamath Bird Observatory. Here is a distant photo of a mixed colony of White-faced Ibis and Franklin’s Gull from 30 June 2010 Malheur NWR, Oregon. Copyright (c) 2013 David Vander Pluym

The following video, shot by Lauren at Malheur NWR, shows just how raucous a Franklin’s Gull colony can be:

Birds of the LCRV (Rosenberg et al 1991) cites only 25 records (of 40 individuals) for the LCRV with slightly more than half coming from fall (particularly late Oct-Nov). In recent years, with an increase in coverage of the spring waterbird migration on Lake Havasu, the species has been shown to be a regular migrant, usually in singles or small groups, but with a high count of 32, in spring primarily mid-April to mid-May. On the other hand, it has been rare but regular in fall with ~2 typically reported. In recent years the species has primarily been recorded around Lake Havasu, particularly during morning lake watches from Cape Havasu. Likely this is primarily coverage and the species can be expected anywhere along the river/lakes in the valley as well as marshes and flooded fields. One of the higher counts comes from Rotary Park in Lake Havasu City, but not from the beach, the birds were actually on the golf course! 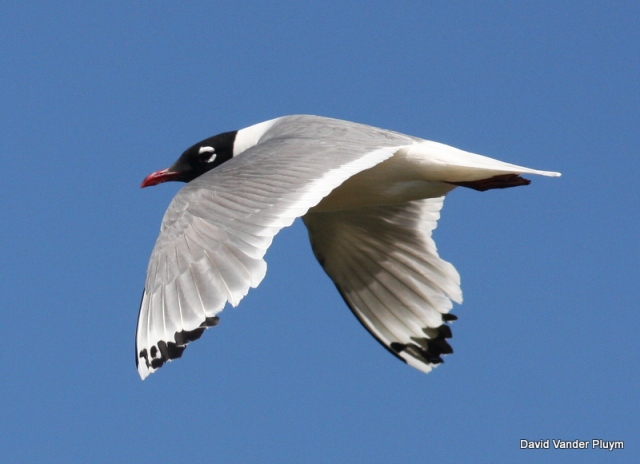 Franklin’s Gull is a long distant migrant, breeding colonially across the northern Great Plains and locally south to the northern Great Basin. Look at how worn the flight feathers are on this individual at Malheur NWR Oregon, 22 July 2010. Not surprisingly this species molts on the breeding grounds in the fall. Copyright (c) 2013 David Vander Pluym

Franklin’s Gulls begin the prebasic molt on the breeding grounds. In this photo you can see P4 growing in and that the outer primary coverts are worn, contrasting with the inner primary coverts. This individual was at Malheur NWR Oregon 22 Jul 2010. Copyright (c) 2013 David Vander Pluym

This year the species has been on the move early across the western United States, with some people reporting that this beats their previous early record by a month! It is interesting how widely scattered these reports are with reports coming from Site Six in the LCRV, the Salton Sea, Sedona Az, Nevada, and even Wyoming among other places. All of these birds have been reported as adults in alternate and clearly they could turn up anywhere in the west right now. It would be great to get the data of this early push into one place and ebird.org is a great spot to do this. It will be interesting to see how this season shapes up in comparison to recent years here on the LCRV!

This group of Franklin’s Gulls were at the mouth of the Rio Lluta north of Arica, Chile 7 Jan 2004, roughly the middle of their wintering range along the coast of western South America. Note the different age classes with several first cycle birds showing brown coverts while the adults show slightly smaller white apical spots on the primaries in comparison to birds in alternate. Given the date, most of these birds are likely undergoing the prealternate molt which is typically complete, one of only two species in the United States and Canada to have two complete molts a year (see text). Copyright (c) 2013 David Vander Pluym

Birder biologists currently living and working in the Lower Colorado River Valley. When not out in the field I spend a lot of my time reading and writing about birds. I have always been drawn to areas under birded and species that we know little about.
View all posts by David Vander Pluym →
This entry was posted in Identification, Lake Havasu, LCRV, Migration, Molt, Species Profiles and tagged Franklin's Gull, LCRV. Bookmark the permalink.