On February 28 of this year, refuge volunteer Jan Richmond spotted a drake Long-tailed Duck near the Bill Williams River NWR headquarters.  This is a rare bird in Arizona, a “Sketch Details” species found mainly on the Colorado River.  I was very pleased that this guy hung around long enough for others to see it – partly because it’s such a beautiful bird, and partly because it was a new species for me for Mohave County!

I went out to the Refuge HQ this morning for a bit of birding.  The Long-tailed Duck was much closer today than it was when I saw it before, swimming contentedly in La Paz County, in the CAP inlet.  I got a few low-quality images, which I doctored up a little bit by darkening them. 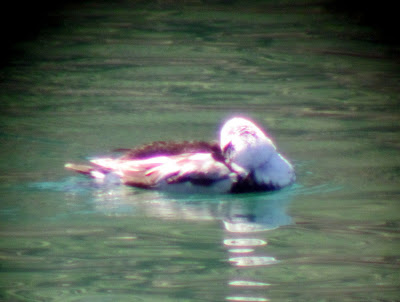 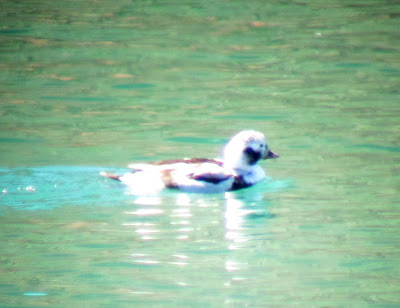 I can’t say I fully understand the complex molt strategy of this species, but this guy appears to be pretty squarely in his “winter” plumage.  The short tail feathers, however, suggest a young bird – maybe a third-year?

I live in Lake Havasu City, Arizona, where I work as a field biologist and spend as much of the rest of my time as possible looking at (and listening to!) birds.
View all posts by Lauren Harter →
This entry was posted in Bill Williams, La Paz County, LCRV, Vagrants. Bookmark the permalink.