Phainopepla Fables has been on the back-burner lately as field work has kept us busy, and we’ve spent the past month or so catching up. We hope to update the blog more regularly now as we should have a little more free time. Bonus: fall migration is on, and the monsoon has started!

Yesterday, with a storm rolling in from SSE, I decided to head out ahead of the storm and see what was on the beach at Rotary Park. A whole lot of Not Much, as it turned out, but soon I spotted this bully coming in with a fish, and decided to spend some time photographing it.

This is a second-cycle California Gull, one that was hatched last year (2012 model). Note that it is molting inner primaries: the fresh, not-yet-grown inner primaries contrast strongly with the full-size but very worn juvenile outer primaries. This bird is undergoing its second prebasic molt. 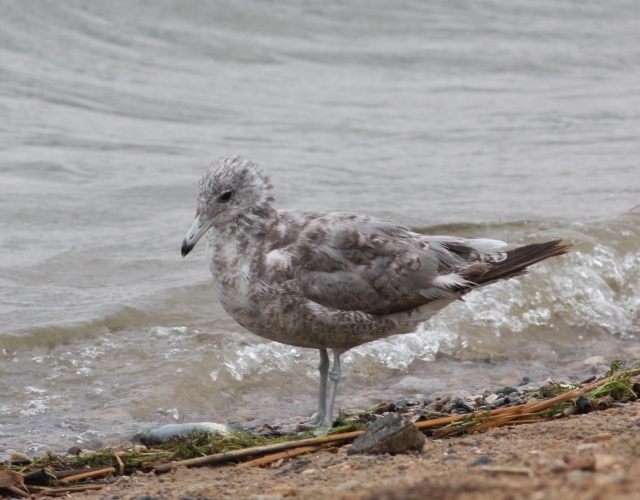 This individual is still heavily marked with muddy or dusky brown, and could be mistaken for a juvenile with a passing glance. Juveniles are just starting to appear in this area this fall, and are still strikingly fresh, cleanly barred, with a more or less all-dark bill. This bird is much more patchy-looking, with a nice bicolored bill. The bill base and legs are sickly gray in color, and many of the wing coverts have been replaced with clean gray feathers. Remember also the extremely worn juvenile outer primaries, feathers that would be crisp and fresh on the young juveniles.

This bird was working very hard to swallow this fish, and failed in quite a few attempts as I snapped photos. Eventually it got the fish down and appeared in the gull flock with a grotesquely bulging throat, but all I photographed was the struggle… 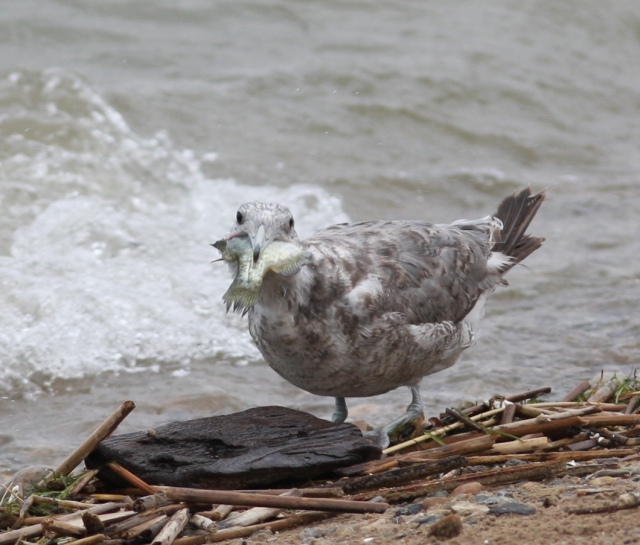 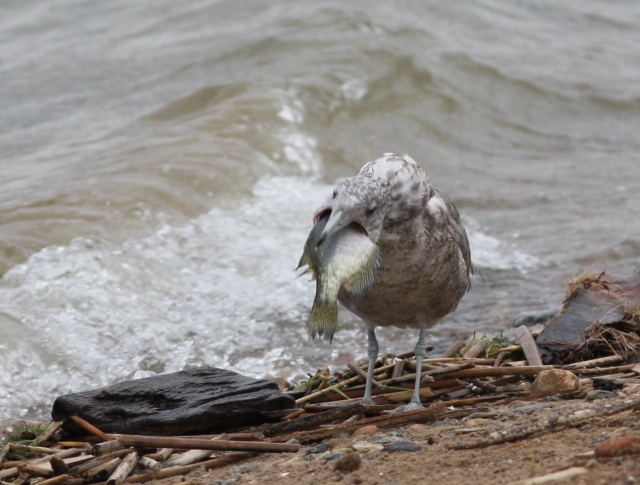 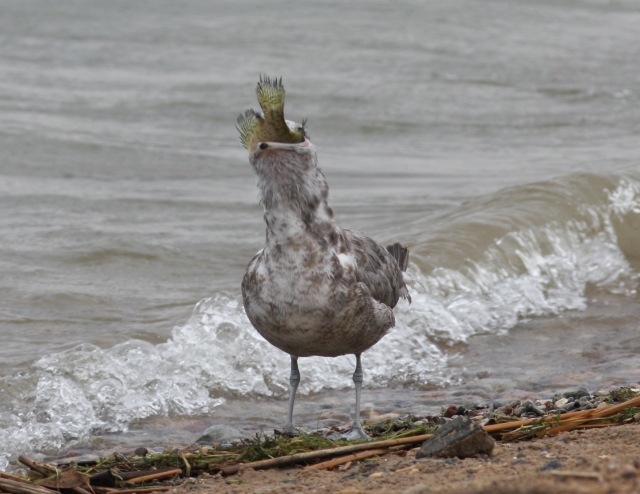 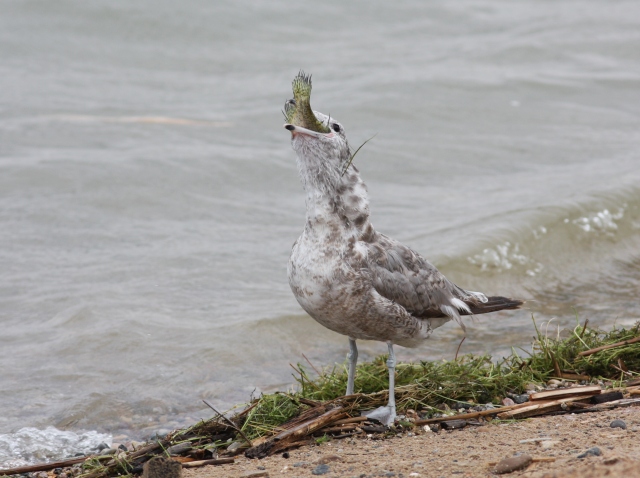 My attention was quickly diverted from the fish swallow-regurgitate cycle when this beast flew in.

This is another second-cycle California Gull. It is at about the same stage of flight-feather molt as the first bird, creating the same odd wing shape. This bird, however, is much more worn and bleached than the first bird. Its overall whitish body plumage gives it more of an adult-like aspect.

Note that the bird’s overall structure and the color of the bare parts are more or less the same as the first bird. The plumage, though, is strikingly different, even though these birds are at the same stage in life.

Check out this close-up of that striking wing pattern. Some scapulars and coverts have been replaced, but many of the coverts have worn away to almost nothing. The secondaries have bleached white at the base. 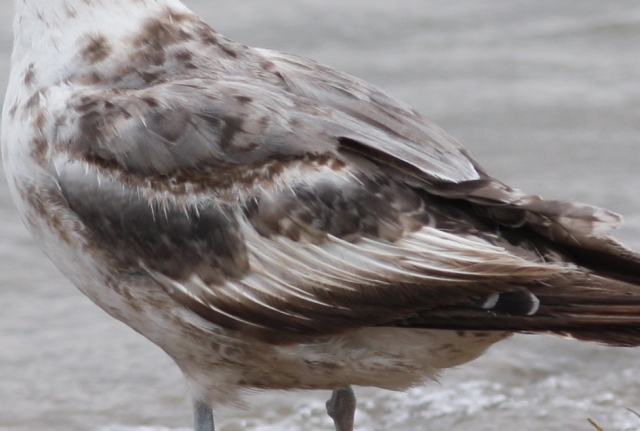 Here are some more flight shots. The pattern of wear and molt combine to make a striking wing pattern not normally associated with the large white-headed gulls! 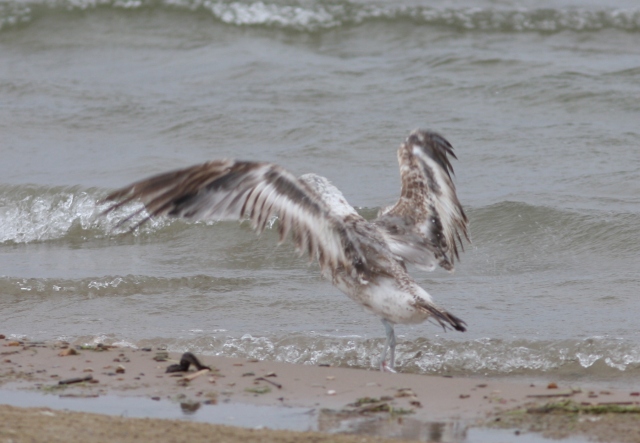 This guy really stands out among the adult Ring-billed Gulls.

California Gulls are four-year gulls, meaning they take four plumage cycles to attain adult plumage. First-cycle California Gulls are a common enough sight in western Arizona: barred or mottled brown overall, with a bicolored bill by winter, becoming more muddied by late winter. These second-cycle gulls are a less common sight, and third-cycle birds rarer still. By the time they complete the second prebasic molt, they will have mostly gray mantles, more adult-like flight feathers, and a little more white in the tail. 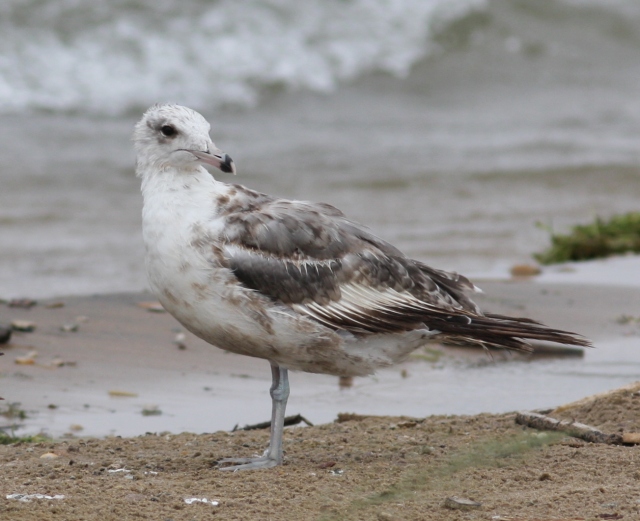 Note: I referenced Howell and Dunn’s excellent book Gulls of the Americas (2007) for this post and highly recommend it for further reading on the subject. I also referenced the gull and molt expertise of David Vander Pluym.

I live in Lake Havasu City, Arizona, where I work as a field biologist and spend as much of the rest of my time as possible looking at (and listening to!) birds.
View all posts by Lauren Harter →
This entry was posted in Identification, Lake Havasu, LCRV, Mohave County, Molt, Species Profiles and tagged California Gull, Gull molt, Gull plumage, Second-cycle gulls. Bookmark the permalink.