Sound Recordings from the Spring

After making good use of my recording equipment this spring, the summer has been much slower for sound recording. I blame the heat, both because it keeps me inside much more often and because I don’t like to take the mic out in extreme heat. I’ve been plenty busy with other projects, though, so I haven’t had much of a chance to process and post my recordings from the spring. I took the opportunity today to do so.

If this grackle could get out of the heat, he’d do it too.

I processed 22 recordings today (plus some really junky ones that I didn’t save), of which I posted 14 on Xeno-Canto. Below are a few of my favorites.

I’ve always been kind of enchanted by the songs of Anna’s Hummingbirds, and lately I’ve been trying to record them. In particular I’m curious about geographic variation in the song. The dive display of the males is especially cool: he dives down in a J, terminating the dive just above the object of his attention (female, rival, human head…). As he ends the dive he gives a loud squeak. There are actually three parts to the squeak; the first two parts of the sound are made by the wings, but the loud last part is made by the tail. Immediately after ending the dive, he will pull back up again, hovering well above The Object as he sings, but only the first part of a typical song. Then he rises straight up until he’s a speck in the sky, and repeats the dive display. I was fortunate to be able to record a displaying male back in March: listen to it here.

An owling trip to the California side of Lake Havasu in early April turned up only two species, Great Horned and Western Screech-Owls. Still, we got some good eBird data out of it and I managed to get a decent recording of a singing Western Screech-Owl.

The next afternoon, David and I found ourselves in central Phoenix with some time to spare. So we stopped by Encanto Park, our favorite hotspot for Rosy-faced Lovebirds, which I had wanted to record. This was one of the more challenging times I’ve had while recording birds. Recording in a popular urban park, near a busy street, on a Saturday afternoon is not easy! Still, my lovebird recordings came out better than I expected. Listen to them here and here.

The next day, we visited the Hassayampa River Preserve for its bird-banding program. I also took the time to record a few birds. My favorite of these was an agitated Northern Cardinal. It’s difficult to hear in the recording, but between typical call notes he was giving faint song-like notes. 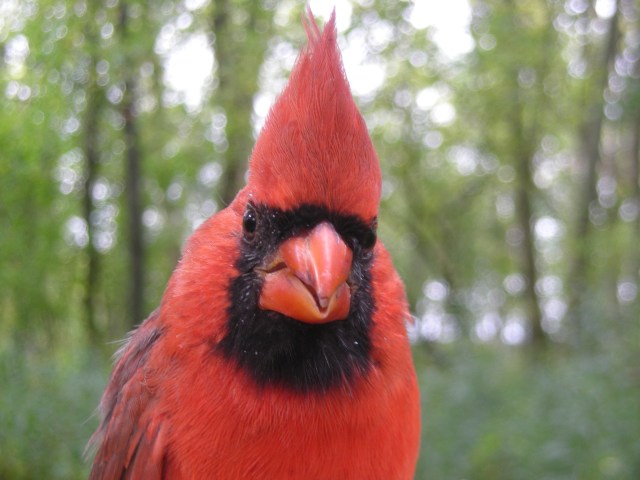 Don’t mess with the cardinal.

I’m feeling accomplished right now, but I still have plenty left from the spring, plus a few really good ones from the summer!

I live in Lake Havasu City, Arizona, where I work as a field biologist and spend as much of the rest of my time as possible looking at (and listening to!) birds.
View all posts by Lauren Harter →
This entry was posted in LCRV, Sound Recordings and tagged Anna's Hummingbird display, Bird recordings, Bird song, Encanto Park, Hummingbird noises, Lovebird calls, Lovebirds in Arizona, Northern Cardinal, Northern Cardinal call, Peach-faced Lovebird, Rosy-faced Lovebird, Screech Owl song, Western Screech Owl, Xeno-Canto. Bookmark the permalink.

1 Response to Sound Recordings from the Spring