With the mid-November chill in the air, it was time for a second visit to the Arizona Strip!  Why go again in mid-November?  Well, mostly to look for Black-capped Chickadees in Colorado City.  I was also hoping for wandering non-breeders to show up on Mt. Trumbull, such as Williamson’s Sapsucker, Downy Woodpecker, and Golden-crowned Kinglet.  Then there’s the influx of Ferruginous Hawks that happens in winter in northern Arizona, with birds from further north replacing the scarce breeding population that I missed this summer.  Of course, rarities are always a possibility, and November is a great time to find rarities in Arizona!

As it turned out, I saw little that I had hoped for, but did see a few less-expected species.  Birding will surprise you every time!

Our plans went through several forms.  We had planned on going November 11-13, but the weather called for rain, which does a nasty number on the Strip’s dirt roads.  The 19th and 20th provided less time and windier weather, but staying dry (and out of the ditches) was a big bonus.  Barbara Carlson, a friend from San Diego, decided she wanted to join us at the beginning of our journey to look for Chukar.  A wrench came into those plans when a Harris’s Sparrow turned up at Catfish Paradise, about 30 minutes north of Lake Havasu City!  Since it would be a state bird for all three of us (Barbara, David and I), we decided to start at dawn at Catfish instead of leaving earlier.  The Chukar, we figured, would still be wandering by late morning.

Catfish was perhaps birdier than I’ve ever seen it, with flocks of Red-shafted Flickers, plus one rare Gilded Flicker!  The Harris’s Sparrow never materialized, unfortunately, and we left after about an hour of poking through every tamarisk and patch of arrowweed in the place.

The drive to the Strip from Lake Havasu is a long one, taking about four hours to get back into Arizona after driving through California and Nevada to get around the Grand Canyon and Lake Mead.  We arrived in Lime Kiln Canyon in the Virgin Mountains hoping for Chukar, a partridge introduced to the western United States.  They had been seen recently in the area, but despite much climbing around and scanning distant hillsides, none materialized for us.

With two dips already for the day, we parted ways with Barbara, feeling a little down.  David and I continued on to Beaver Dam, where Barbara and Paul Lehman had recently found a White-throated Sparrow on the golf course.  It’s always a bit nerve-wracking walking into a golf course pro shop to ask permission to bird the course!  To our amazement, though, the slightly confused-looking lady behind the desk told us it should be fine, and would we please sign this release to rent a golf cart!  Declining her generous offer, we wandered around the course on foot.  A few birds were about but the hoped-for Zonotrichia flocks were meager, and no rarities were seen.  Strike three!  Our one highlight was a Bobcat sunning itself in the afternoon sun, more or less oblivious to any danger from us. 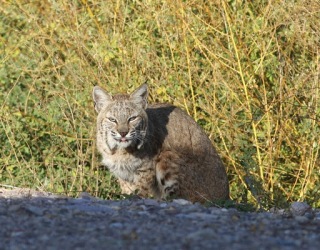 Next, with a short detour through Utah, we pointed the car south toward Mount Trumbull.  In the faint evening light I scanned fenceposts for Short-eared Owls, but the drive proved uneventful.  Arriving at my favorite campsite on Mt. Trumbull, the car’s temperature gauge read 37–pretty chilly for a couple of desert dwellers!  Nonetheless, we bundled up and took a walk under starry skies, listening for owls.

The next morning, the temperature gauge didn’t budge from 37, and the skies were overcast.  Since we didn’t have enough time to hike Mt. Trumbull (and it didn’t seem worth the effort in any case), we tried the drive up Mount Logan, stopping periodically at likely birding spots.  It was on this road that I got the magic 300, my goal for my Mohave County Big Year, in the form of a flock of 13 Wild Turkeys in the road! 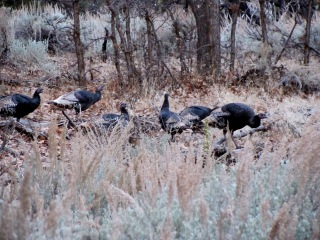 Not exactly a rarity for #300, but it is very local and hard to get in the county, besides being fitting for Thanksgiving-time.

Overall there were plenty of birds to see, the most interesting to me (besides the turkeys) being Cassin’s Finches and lots of juncos: Oregon, Gray-headed, a few Pink-sided, and a handful of birds that looked like Red-backed but with paler bills.  We eventually reached the top of the road at Mt. Logan, where a lovely viewpoint overlooks the Strip to the northwest and Mount Trumbull.

Before long we decided it was time to go, if we wanted to bird Colorado City before heading home.  We stopped at a few tanks along the way but found the birding slow overall.  The welcome highlight was a Rough-legged Hawk flying over a tank about 10 miles south of Colorado City!

Colorado City itself is a strange place.  Its existence and the habits of its population are interesting topics, but perhaps for another blog!  The small town is situated among red rocks, with the green ribbon of Short Creek running through it.  Located directly on the Utah border, the riparian habitat there can turn up some good birds, especially Black-capped Chickadee, our target bird.  After covering the area for a few hours, we weren’t able to turn up any chickadees, but we did find a rare Yellow-shafted Flicker and a county bird, Varied Thrush!

Although this trip didn’t produce the species we had hoped for, I did manage to get several county year birds, and enjoyed some good birding, nice scenery and great company!

I live in Lake Havasu City, Arizona, where I work as a field biologist and spend as much of the rest of my time as possible looking at (and listening to!) birds.
View all posts by Lauren Harter →
This entry was posted in Arizona Strip, Big Year, Mohave County, Trip reports. Bookmark the permalink.

1 Response to The Arizona Strip, v.2