I spent this weekend birding with Barrett Pierce of Amarillo, TX, et al. searching for the Nutting’s Flycatcher, rails, Sage Sparrows, and generally enjoying our local birds and rarities. The flycatcher hadn’t been seen since February 1 or 3, and extensive searching by quite a few birders hadn’t turned up a wheep. Still, it wouldn’t be unheard of for the bird to leave for a little while and then come back, so it was worth a try!

Our first morning at Mosquito Flats didn’t produce the flycatcher, but we did turn up 24 species. Barrett got beautiful photos of Crissal Thrasher and Phainopepla, we had a flyover pair of Peregrine Falcons (perhaps local breeders?) and a Red-tailed Hawk showing some traits of the southwestern subspecies fuertesi, and a singing Lesser Goldfinch produced a mind-boggling array of mimicked vocalizations in its rapid-fire song. 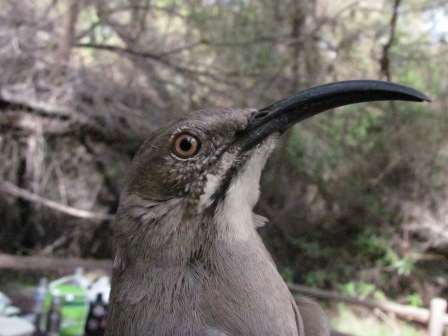 Mosquito Flats is a great spot to see Crissal Thrasher.

At the Bill Williams Delta, waterbirds were plentiful, including two of the continuing White-winged Scoters and Red-throated and Pacific Loons. Later we tried scanning from a different vantage point and succeeded in finding the continuing Long-tailed Duck. Goldeneye numbers are dwindling, and the only Barrow’s seen were a very distant pair.

Our next spot was Quail Hollow in California, where we hoped to turn up some Sage Sparrows. It took some searching, but we finally ran across about five foraging together in the desert flats. The birds were skittish, giving momentary views before disappearing into dense bushes. Finally, though, one sat up for a moment and Barrett got some fantastic photos. We were interested in trying to identify the birds to subspecies. According to Rosenberg et al., both canescens from interior California and nevadensis from the Great Basin winter in the LCRV, but the relative status of each is unknown. I would guess that nevadensis would be the more common, but these birds showed characteristics of canescens: very light, sparse streaking on the back and underparts, and a solid black malar mark. Interesting and worth further investigation. I also wonder if the two subspecies might segregate based on habitat. Sage Sparrows are local wintering birds in the LCRV, frequenting brushy flats next to the river such as at Quail Hollow, weedy edges of agriculture, as well as native desert habitats. 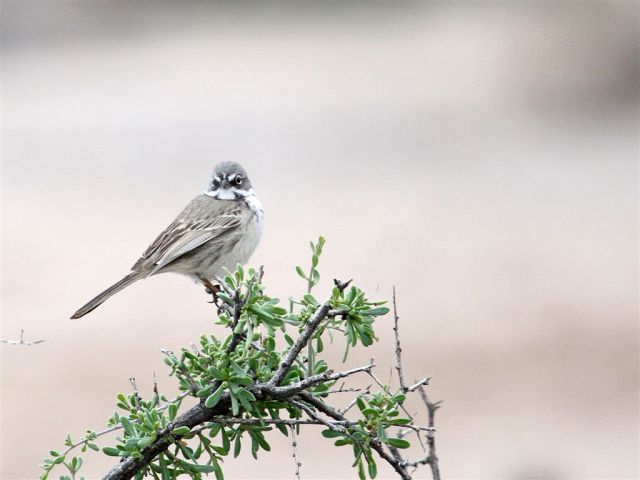 Sage Sparrow, photo by Barrett Pierce. Showing characteristics of subspecies canescens: sparse streaking on the underparts and back, and a solid black malar mark.

We spent the late afternoon and evening searching for rails, without much luck: only heard-only Virginia Rails, Soras, and a bonus (rare in winter) Least Bittern. But, the theme of the weekend was You won’t find what you don’t look for, so it was rewarding just to put in the time and build up some Birding Karma.

After some indecision about how to spend Sunday morning, it was decided that we should try for the Nutting’s Flycatcher again. After all, You won’t find what you don’t look for! We arrived at Mosquito Flats at 8, and wandered up the road, enjoying all the various desert birds. Suddenly at 9:15, standing on the road about 200 meters from the double power pole, I heard that sound.

The flycatcher lived! We hustled to the double power pole, where we found the flycatcher perched out in the open on a mesquite branch. The next 45 minutes were filled with eye-melting views of the celebrity bird. Despite some challenging lighting, Barrett managed to snap some great photos. For this bird to suddenly appear after so long an absence reminded us once again: sometimes you just need to put in the time looking for your target bird, even when there is little hope. You won’t find what you don’t look for! 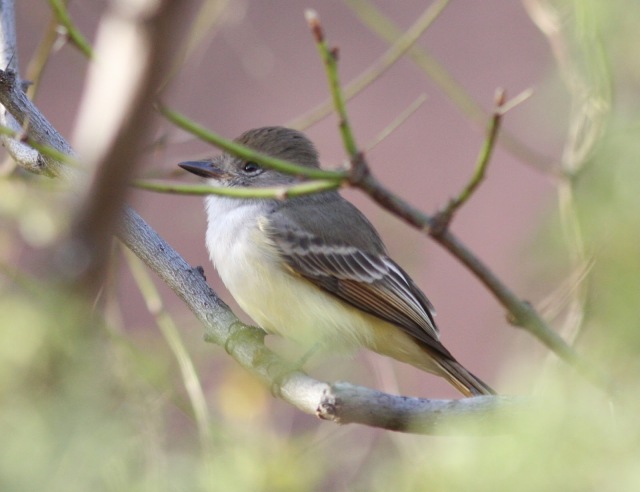 I live in Lake Havasu City, Arizona, where I work as a field biologist and spend as much of the rest of my time as possible looking at (and listening to!) birds.
View all posts by Lauren Harter →
This entry was posted in Bill Williams, La Paz County, LCRV, San Bernardino County, Sound Recordings, Trip reports, Vagrants and tagged Crissal Thrasher, Nutting's Flycatcher, Red-tailed Hawk, Sage Sparrow. Bookmark the permalink.